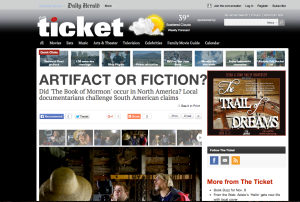 Here’s a link to the article:

When Kels Goodman told members of The Church of Jesus Christ of Latter-day Saints in Tennessee he was researching “Book of Mormon” archaeology, they responded with, “Oh, you’re on your way to South America?”

He had to do a bit more explaining after that.

“We said, ‘No, it’s right here in your backyard,’ ” Goodman recalled. “Then all of a sudden the gasps happen. But nobody came up and said, ‘How dare you speak blasphemy.’ If anything, we had more people coming and saying they agreed with what we were saying.”

Goodman is making “Hidden in the Heartland,” a new TV series that explores the possibility of events from “The Book of Mormon” happening in North America. Most scholarly research on the topic has focused on Mesoamerica and South America — academics have typically scoffed at the North America arguments — so Goodman’s efforts are not without disagreement. Goodman hopes the reaction in that Tennessee ward, though, as well as his Kickstarter campaign that raised $10,000, signals greater interest in the topic and his show.

“Hidden in the Heartland,” which is scheduled to launch in spring of next year, also utilizes Ryan Fischer, whose series “Nephite Explorer” airs Sundays on KJZZ and online at TrueNorthTV.org. Goodman’s series was originally going to be a scripted drama/adventure a la “National Treasure,” but he changed course as he accumulated more documentary-type material and drew from Fisher’s expertise. Episodes of “Hidden in the Heartland” will be in a documentary format, peppered with dramatic reenactments.

The show’s pilot episode premiered at the LDS Film Festival and Book of Mormon Evidence Conference earlier this year, and is currently available on DVD. Goodman is currently working on filming the reenactments and sorting through the documentary footage. He thinks the show’s first season will be anywhere from six to 12 episodes, and he’s still securing where it will air. “Hidden in the Heartland” will explore, among other things, various archaeological findings from the 1800s that he feels haven’t gotten their due — Goodman said lots of artifacts were excavated in non-academic settings as American settlers reclaimed land, and other academically unearthed artifacts were downplayed by various government policies.

“That’s what we’re wading through, and that’s part of the stories that we tell, is to recover a lot of the untold stories or shunned stories about all of the elements that relate back to, ‘Could this have been related to the “Book of Mormon?” ‘ ” Goodman said. “And we leave it to the viewer to make that conclusion. We make it very open — and we try really hard to not be ‘Ancient Aliens.’ ”

According to Tyler Livingston, president of the Book of Mormon Archaeological Forum, a lot of these specific artifacts are rather problematic.

“These evidences have been around for a long time, but some of the artifacts they use have been proven to be forgeries,” Livingston said. “A lot of the things they use, it just isn’t all that accurate. It has been gaining ground because people that have been pushing it are great spokesmen, they’re great orators. The material they use isn’t widely accepted by actual experts or scholars in those fields.

“My guess is they’re great people, they think they’ve got everything down and they’re doing a great thing, and I applaud them for that,” he continued. “I think it’s great what they’re doing. I just wish they’d be a little more rigorous in their research.”

Livingston mentioned recent findings that further bolster the Mesoamerican origins of “The Book of Mormon.” In particular, research indicating that certain Uto-Aztekan languages are rooted in both Hebrew and Egyptian — “The only two old world languages mentioned in ‘The Book of Mormon,’ ” he said. “This is peer-reviewed research, and it’s pretty groundbreaking.”

That particular point, of academic versus amateur research, is met with very different feelings from both camps. Ryan Fischer, whose background is in documentary filmmaking and investigative journalism, said that prior to the Internet, scholarship and archaeology were only available to academic professionals working in universities or the government.

“But when the Internet came around, anybody that had interest in these subjects had access to it,” Fischer said. “Not only do you have amateur archaeologists, anthropologists, students of history looking into it, but you also have a resource where they can share what they’ve found. And that’s why the whole game has changed.

“At the academic level, they don’t make any allowances for starting something on faith,” he continued. “If you believe the ‘Book of Mormon’ is true and you want to find archaeological evidence to support that, you can’t do that in academia. So you’re very restricted in academia in what you can look into, and under what context and so forth. And then everything is subject to peer review, and a watered-down version comes out, and you can’t make bold claims.”

According to Fischer, a big issue facing “Book of Mormon” archaeological commentary is how anti-Mormon proponents have mobilized themselves. Sifting through the endless amount of online materials can be as tricky as an archaeological dig. Pro-Mormon champions, he said, need to catch up.

“If you see information as a weapon to control people in a bad way, or to liberate people in a good way, then there’s this arms race on the Internet right now,” he explained. “And I have to say that the opponents to Christian doctrine and Mormon doctrine have organized en masse, and are very effective at giving bad and false information to this Millennial Generation that’s going to use Google as their source. So we need thousands of people to get online and start fleshing out what’s true and what’s not true. I want to see this Millennial Generation turn into scholars and free-thinkers that are good researchers, and know how to discern false sources from truthful sources.”

Daily Herald features reporter Court Mann can be reached at (801) 344-2930 or cmann@heraldextra.com. Twitter: @CourtMannHerald and @TheCourtMann

Help us spread the word about this website by inviting some of your friends over to have a look. This won't spam your Facebook account, and you can select whichever friends you would like. We send the message for you automatically! Just click the blue button above to start.